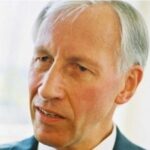 The Department of Electrical Engineering and Computer Science and the Center for Sensor Systems (ZESS) mourn for Prof. Dr. Rudolf Schwarte, who died on March, 7, 2021, at the age of 82.
Rudolf Schwarte, born in 1939, grew up in Quakenbrück. Until 1959 he attended the Artland-Gymnasium. After graduating from high school, he studied communications engineering at RWTH Aachen University, where he worked as a research assistant and senior engineer. In 1978 he started working in industry at Keiper GmbH & Co in Kaiserslautern. From 1980 to 1981 he worked as development manager at Mitec GmbH in Ottobrunn.

In 1981 he accepted the call as a professor at the Institute for Telecommunications at the University of Siegen, where he taught and researched as head of the institute until 2007. In 1988 he founded the “Interdisciplinary Center for Sensor Systems NRW (ZESS)”, a focal point of today’s sensor research in Siegen, and was also its chairman until 1998.

He is considered the father of “fast” 3D vision and is the inventor of the Photonic Mixer Device (PMD) technology, which forms the technological basis of various spin-offs from ZESS (S-Tec and today’s successful company PMD-Technologies). He received several patents for this development and was nominated for the Research and Innovation Prize of the Federal Republic of Germany. With more than 50 patents, Prof. Schwarte was one of the world’s leading researchers in his discipline. In 1995 and 1997, the state government of North Rhine-Westphalia awarded him the innovation prize.

Prof. Schwarte taught a large number of academic students who are now active in the private sector or partly as professors themselves, such as: Prof. Dr. Otmar Loffeld, Prof. Dr. Bernhard Bundschuh, Prof. Dr. Rüdiger Klein. Three of the scientists whose doctoral studies he supervised were awarded the NRW Bennigsen Foerder Prize for young scientists in 1986, 1991 and 1992 for their research.

During his time at the University of Siegen, Prof. Schwarte was active in many bodies and committees. Since 1995 he has also been a member of the scientific advisory board of the Heidelberg Image Processing Forum. He was appointed to the “Optical Form Detection” working group by the VDI and VDE.

In 2005 he was awarded the Cross of Merit 1st Class of the Order of Merit of the Federal Republic of Germany by the Secretary of State for Science, Hartmut Krebs. The award is a special recognition for Professor Schwarte’s services to research, in particular the successful application orientation and the innovative transfer achievements of his work.

Prof. Schwarte was a great, intelligent and visionary personality who managed to combine collegiality and determination. Due to his helpful, conscientious manner, his exemplary commitment and hard work, he was valued and liked by all employees and students.

After reaching the age limit, he was released from his official duties, but remained deeply connected to the University of Siegen and in particular to the ZESS.

His decease reminds us of the impermanence of all human existence, but we also experience in a special way that the thoughts, visions and intellectual legacy outlast this biological transience and live on. We will keep this experience as a memento and obligation for our own work. In the spirit of this experience and hope for the immortal, we extend our deepest condolences to his family and all those who were close to him.